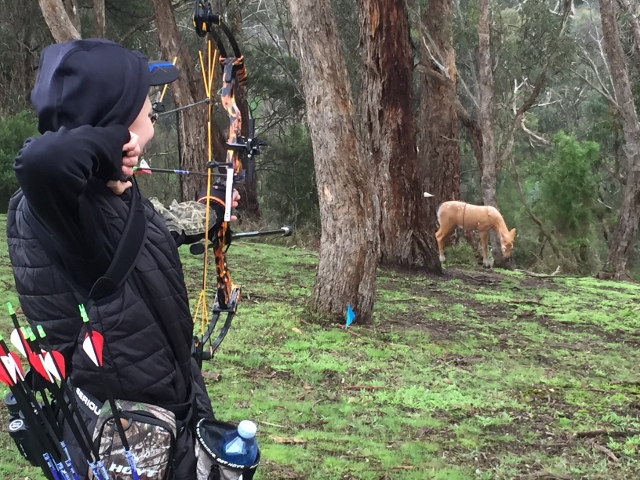 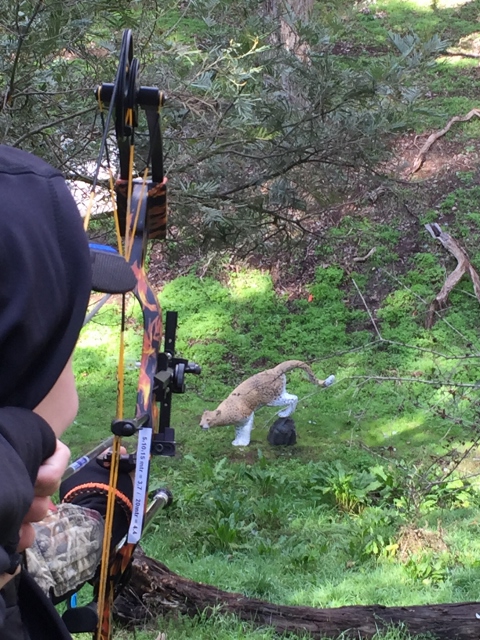 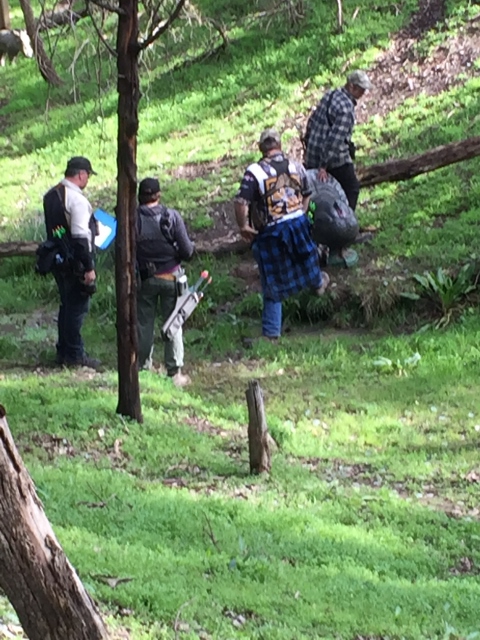 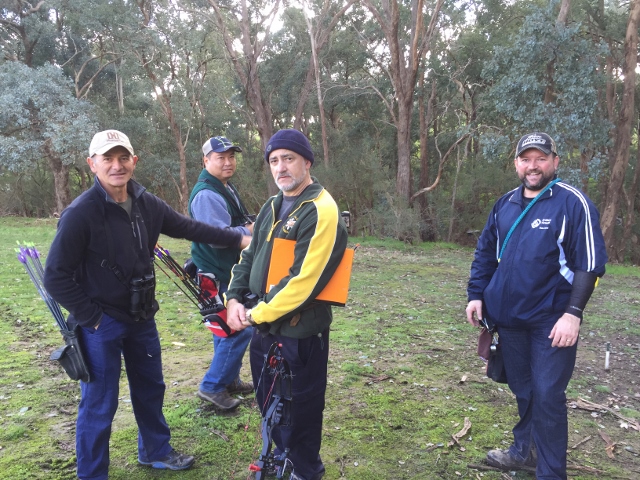 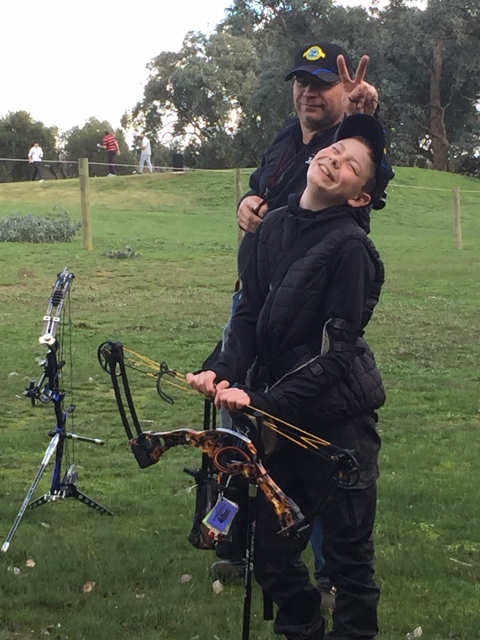 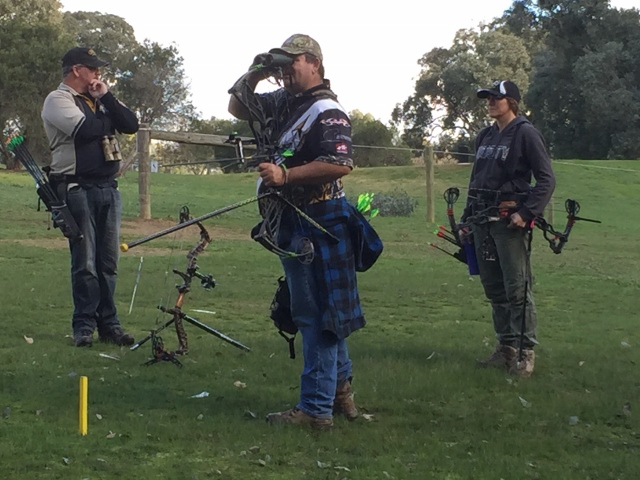 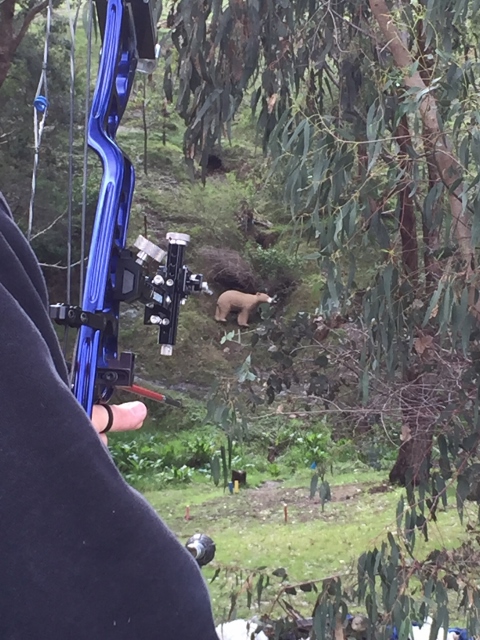 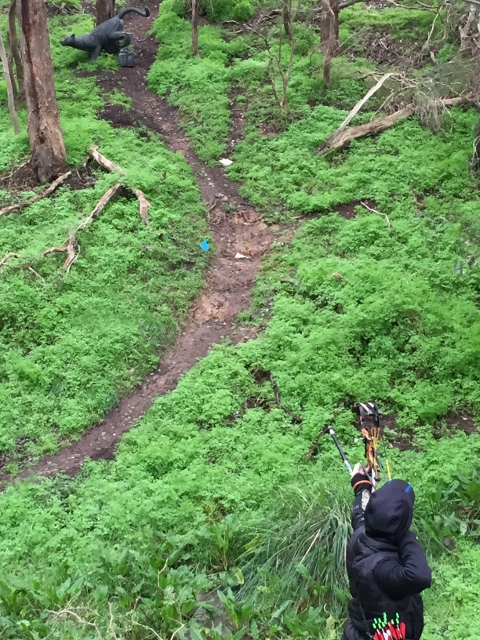 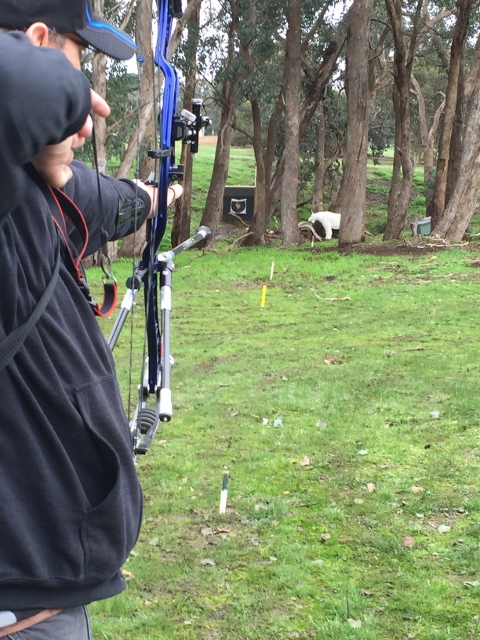 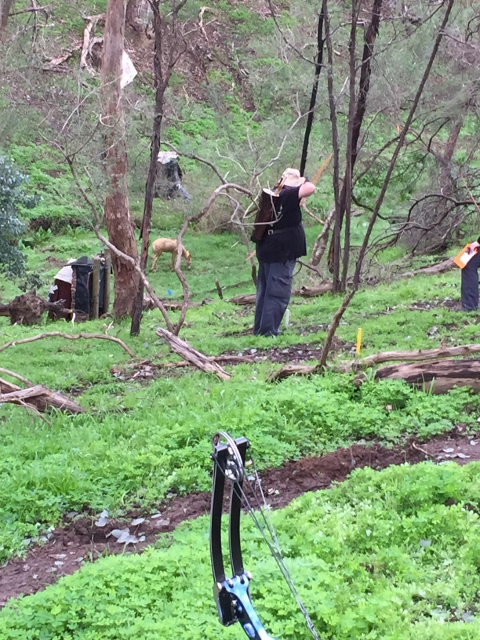 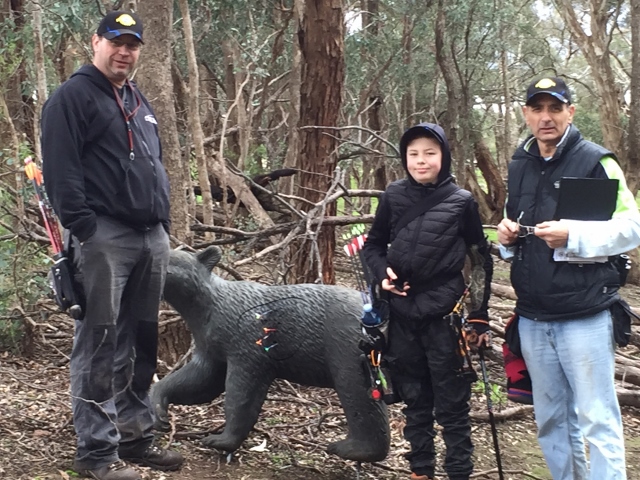 The 9th & 10th of July 2016 had been nominated to run the State Titles at DVA and while in January this seemed to be too far off to really worry about with all the other busy events  Diamond Valley Archers were running; this window of time soon disappeared. The team came together, long range forecasts were reviewed, mapping the terrain was being done and a plan soon came together.

The 8th saw members roll in to set up, the week was wet and rains had filled the stream that runs through the course creating other opportunities, along with  the usual crew of reliable members we added one of our youngest Mitch (12). It’s good to encourage these youngsters and as Mitch learn a lot from the day, so did we as we looked at our courses through his eyes.

Day one was promised to have only limited sunshine, but Mother Nature put on a splendid day. In the morning the course were covered with a light mist / fog and the range officials were out checking the ranges were ok to go. Soon the ranges were filled with Archers and the chatter filled the surrounding valley with anticipation and excitement, arrows making their mark were pleasing to the ear, and the sound of “squish” as the arrow missed its mark and ended up in the wet ground.

Ranges were not maxed out yet tricky shots placed so that they gave one a sense of comfort at the shot that changed to surprise when they saw their arrows missed that pro-ring on what seemed an assured 10. The honey bear placed in open, but shaded by trees and the shot taken through the folk of a tree (although big enough to see a Mack truck go through it) saw archer have to consider the shades and shadows as well as what happen to that score zone that appears so clear through the binoculars.

Our Visitors from Queensland, Ian and Jason were soon to see and feel the difference from shoots they were used to, the steep gully shots put a new meaning to sloped shots, canting and other elements, none the less they accepted the challenge, along with the strange feel of the sun rising at 7:30 am rather than what they were used to.

At the end of the day there was only 29 points difference between the leading top ten scores for the day in the sighted divisions, in the Trad division Ian, Richard and Mick were the game in play.

Day two, the weather person was giving assurances of wet and windy weather on the way and the archers gathered eager to get in and out of the new courses laid. The previous evening the team was back out re-setting the courses with some more surprises, coming back in well after 6:30pm.

The turkey, provided its own challenge as the shadows from the moving overhead trees created a new perception of where to aim leaving some archers with cheers and others with an expression on their face that said it all.

Once again the Bedded Elk (one of the largest 3D targets) with the 10 zone the size of a small dinner plate, saw arrows fall in the 8 and 5 zones with archer’s scratching their heads.

As the day progressed, the archers moved through the courses in uniform precision with the objective, get your best shot in and beat the coming inclement weather back to the club rooms.

The range setters provided challenges, that made you think of target placement, one’s footing and the weather.

At the end of day two, saw three archers achieve the elusive perfect round of 100, Drew, Ian, Josh congratulations.

With presentations soon finalised, the teams brining in the targets off the courses it was time to close off the State Titles for 2016, and look towards our next Victorian shoot at Twin Cities on the 20th & 21st of August 2016.